SITE INFORMATION
The project is located on the edge of the West Lake, Hanoi, Vietnam. West Lake is the largest natural freshwater lake in Hanoi with an area of more than 500 hectares.
Around 1920, the building used to be the observatory of the French colonial seaplane airport in Hanoi for the purpose of scouting the city from above. In 1954, Seaplane station was owned by Vietnam Government. After the liberation of North Vietnam, the airport was demolished, this building was owned by a Vietnamese film studio and in the 2000s it became a restaurant. After a series of scandals about operating permits and illegal discharges into the lake in 2010, the work has been abandoned until now.

CONCEPT WATER PUPPETRY
Associated with the ancient rice river civilization, with the water surface as the main element, it originated in the villages of the Red River Delta area of northern Vietnam. Today's Vietnamese water puppetry is a unique variation on the ancient Asian puppet tradition. The main materials that create the spirit of the water puppet theater include wood and bamboo.
Nowadays this fork art is disappearing due to the modern lifestyle in the city and lack of new facility and the investing for the outdoor theatre that attractive public.
To regard the context around of this building, we exploit the contacted water surface for creating the theatre Water puppetry originally is an entertainment ritual which to show farmer gratitude toward natural so we wanted to create the shell form for this building with the most natural shape, using hyperbolic paraboloid frames made of bamboo.
Bamboo is an indigenous material associated with traditional Vietnamese villages, so bamboo is easy to find and processed to create buildings suitable for hot and humid climates like Vietnam, especially with buildings that closes to the water. Furthermore, Bamboo Frames are easy to install and disassemble, suitable for projects that require flexibility such as performing and stage.

VISION
Water puppetry is a type of theatrical performance typical of Vietnamese national culture - created from the masses of people, upgraded into performing arts. That is the intelligence, the intelligence of the employee with the artist's soul.
For this project, we want to portray traditional values in a new way. Simultaneous, we want to bring "new life" to abandoned building. 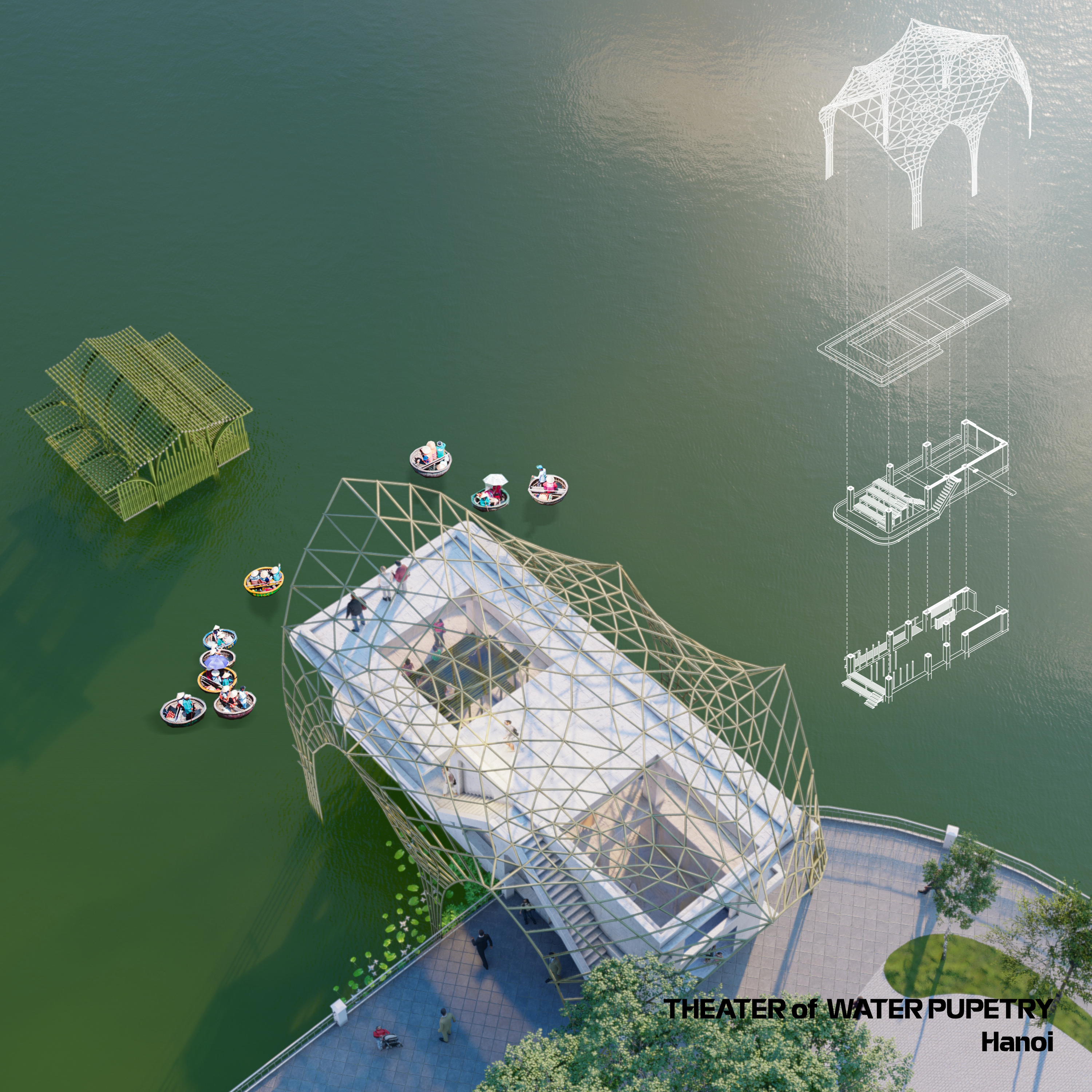 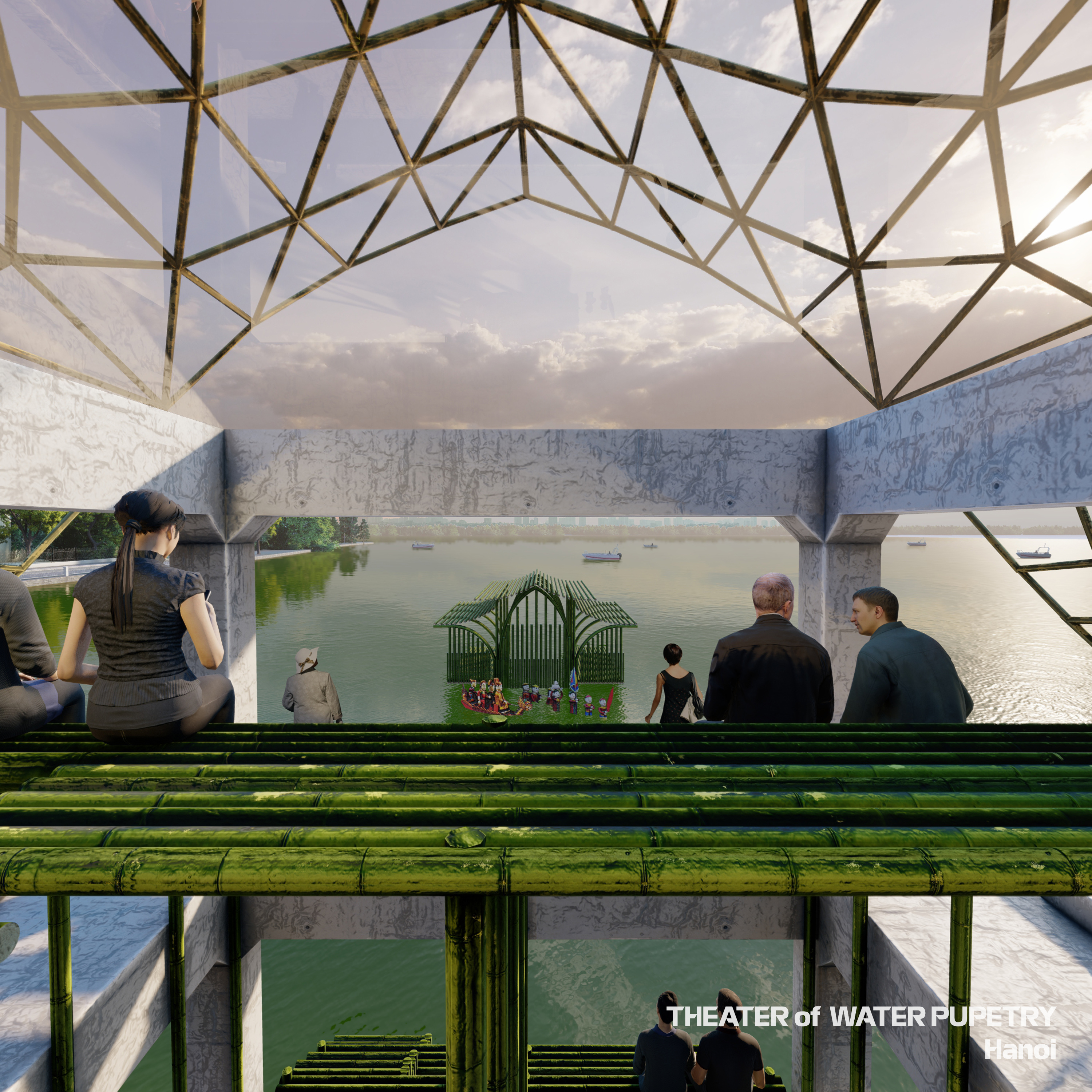 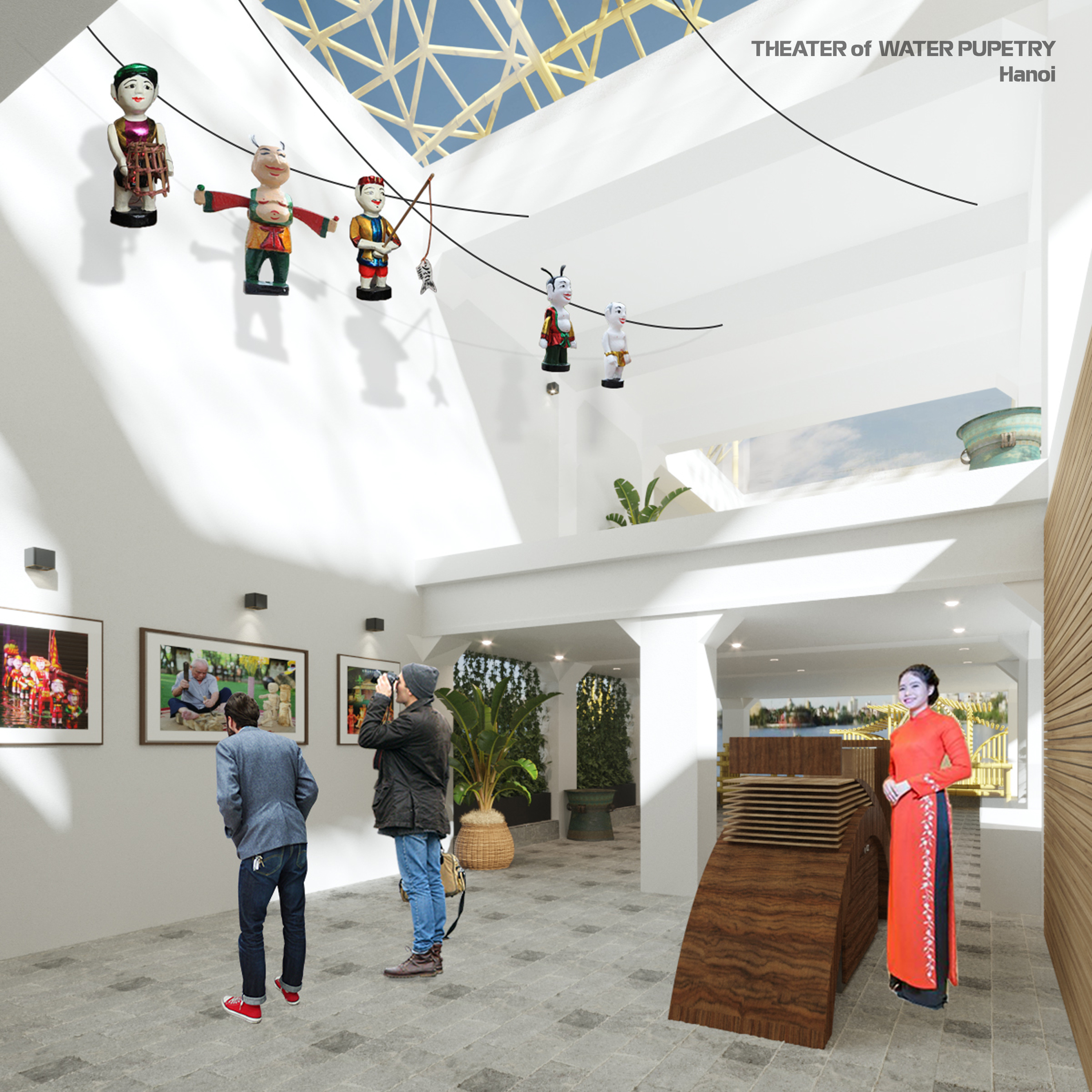 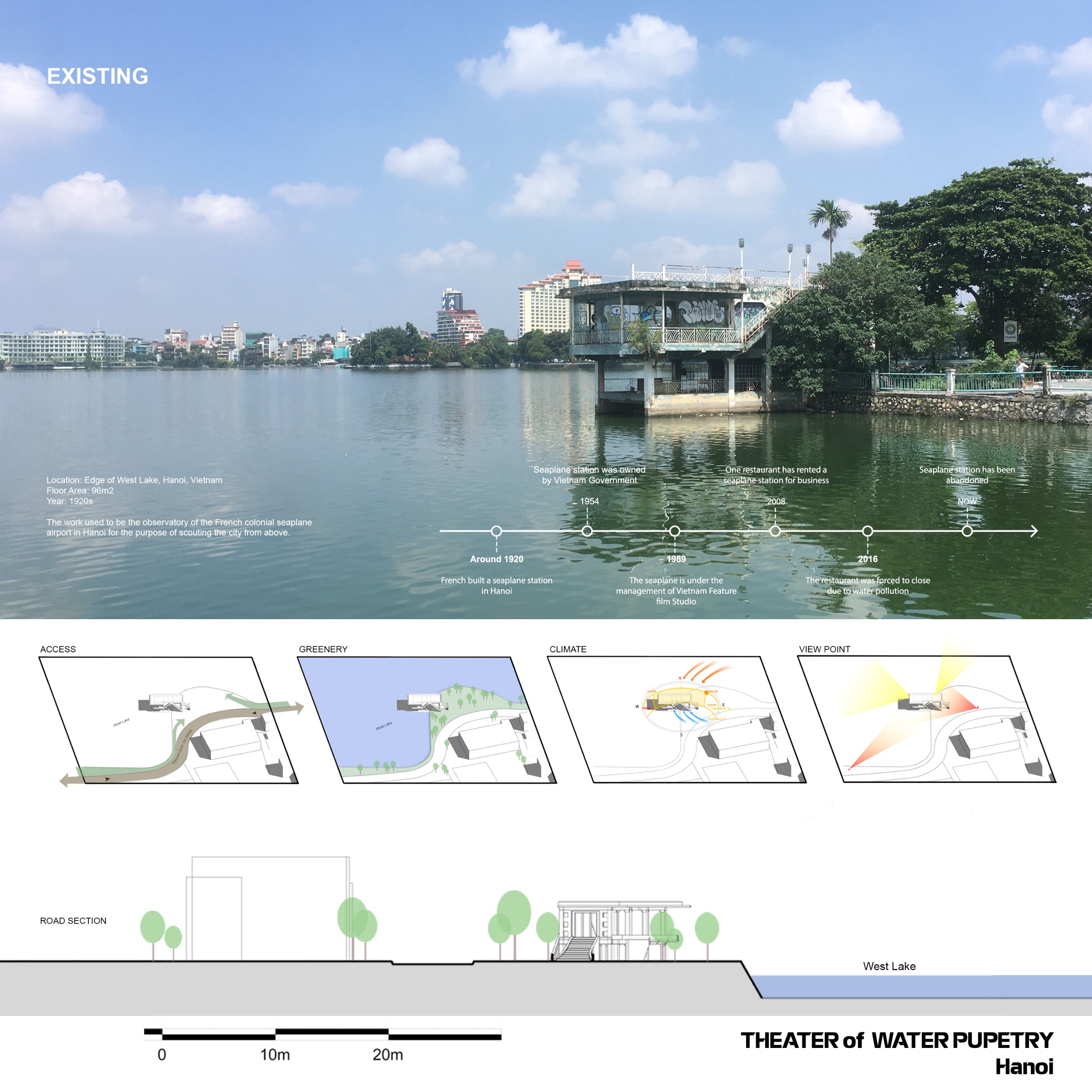 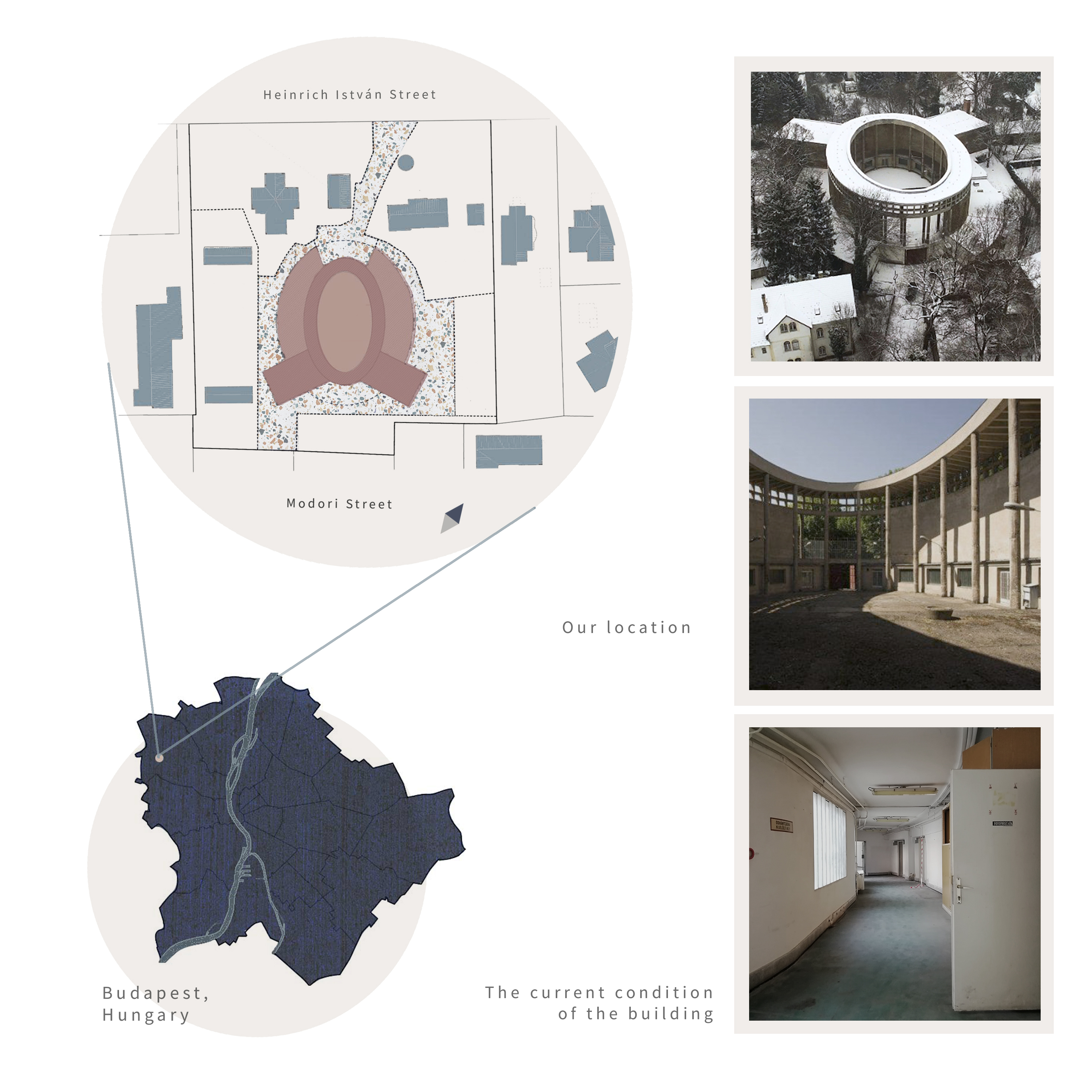 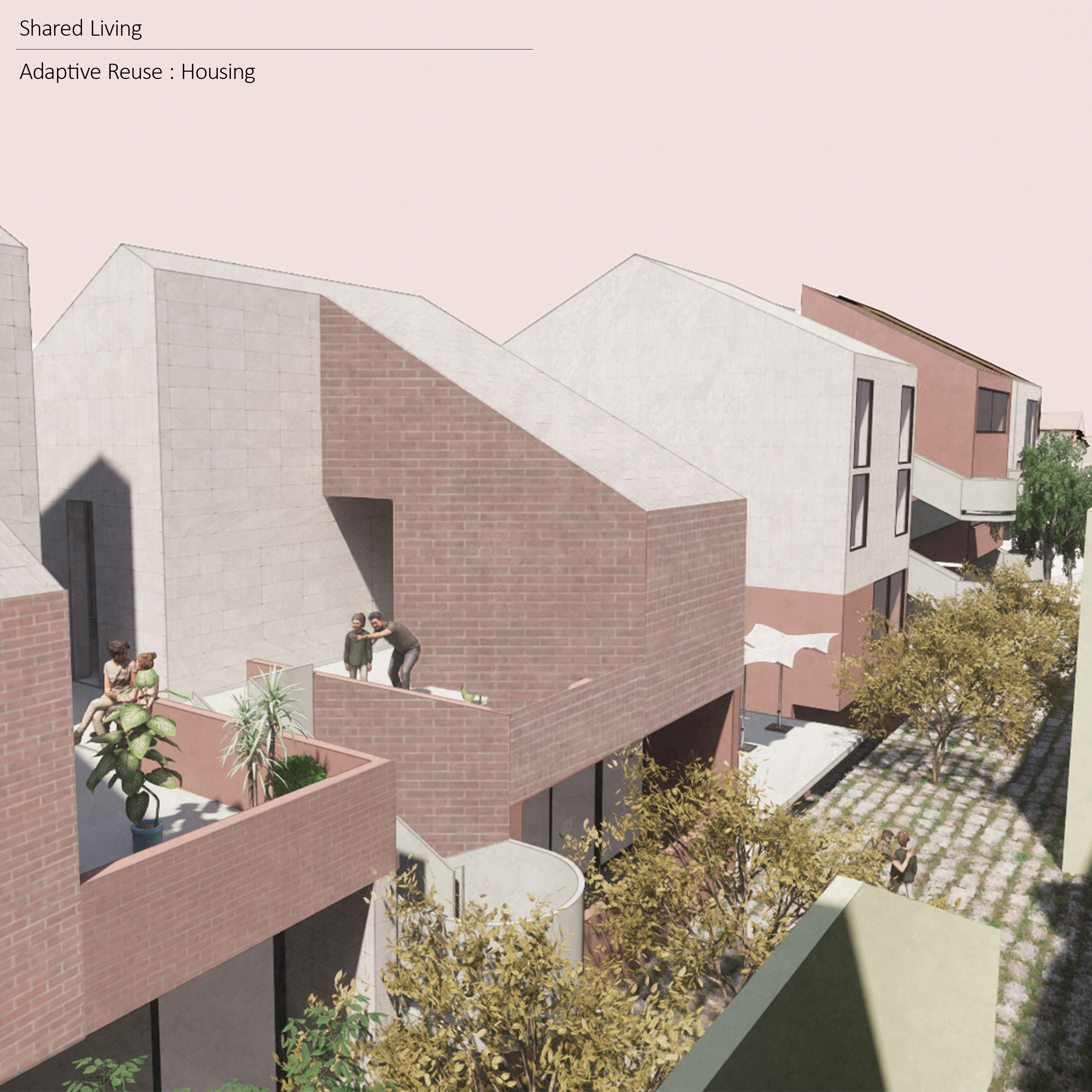